Justin saved up to get these … 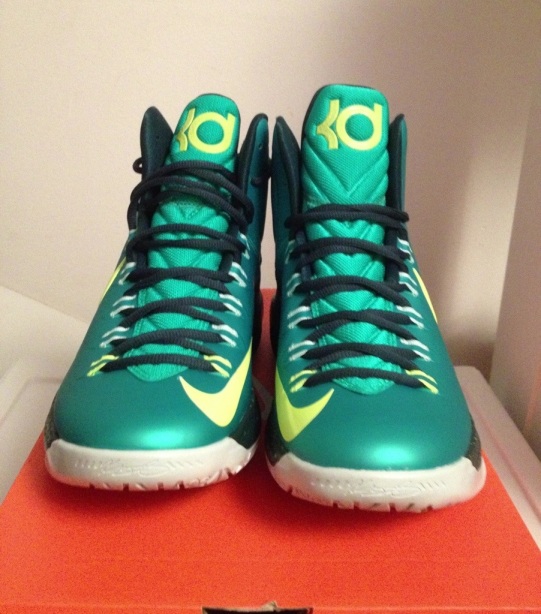 He excitedly showed them to me when I got home from work, and pointed out the ‘cool’ features.

Haven’t even heard of these – KD 5 Hulk?  Something like that.  There’s so many new shoes out there, I’m told by the boys.  These are the latest fads, I guess.  Hubby says that they’re basketball shoes, and they don’t even use them to play basketball.  I only heard the full story today …

After saving up the change from his lunch money everyday, and his pocket money every week, and the change from our grocery shopping purchases here and there, Justin finally had enough to buy a pair.  So yesterday, the boys called all the sports stores to find out if they had it in stock.  The first few they called were out of stock.  One had it, but not in his size.  One could order it for him, but it would be several weeks before they got it. Finally, they found a store in a mall about 10 miles away.

So off the two brothers went.  Big Brother said that Justin was bouncing in the car all the way to the mall.  As soon as they got out of the car, he was hop-skipping towards the mall entrance.  In the mall, he made a bee-line for the directory.  Locating the store, he hop-skipped to the store, tried on one shoe, and said that he would take it.  No, no, said Big Brother.  Try on both shoes and walk around and make sure it feels right and fits well.  A quick try-on and walk around, and it was purchased.

In the car, on the way home, Justin was bouncing in the car again, cradling the box.  At home, Big Brother and Father teased him endlessly.  He wouldn’t let them touch it – doesn’t want to get it dirty or smudged, or anything.

I just hope he can use it through the summer … he grows so fast these days, he’ll probably need new shoes by the summer.  Well, he can start saving up again for the next fad of shoes to come out for the summer.

At least he’s learned how to save up money, and for that I’m glad 🙂