The Team played on a frozen field, surrounded by hills and mounds of frozen snow and ice, turned black with dirt and gas fumes. 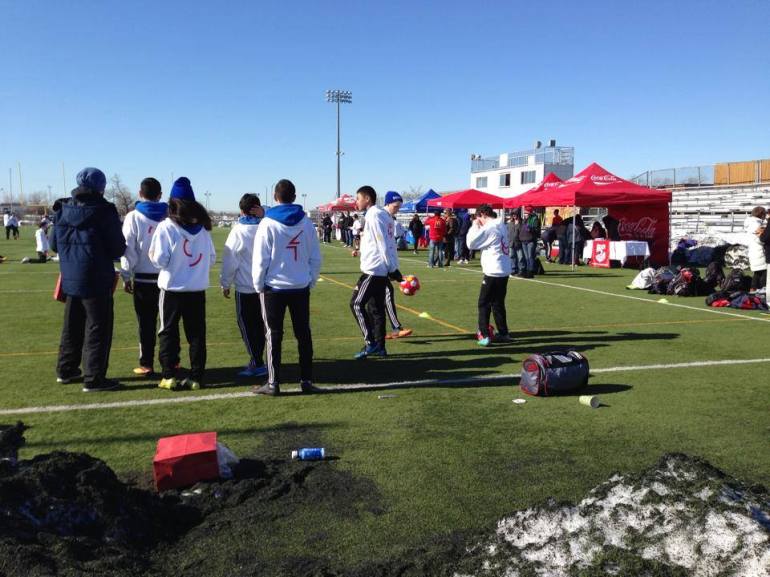 In the middle of this cold, freezing winter, my son’s soccer team was signed up to play in the Copa Coca-Cola USA tournament.

Thankfully, Mother Nature turned the polar vortex away, and the weather was actually warm and spring-like.  Or maybe since temperatures have been below the freezing point for the past several weeks, temperatures in the 40’s was now a balmy spring-like temperature, and the 50’s is spring weather. 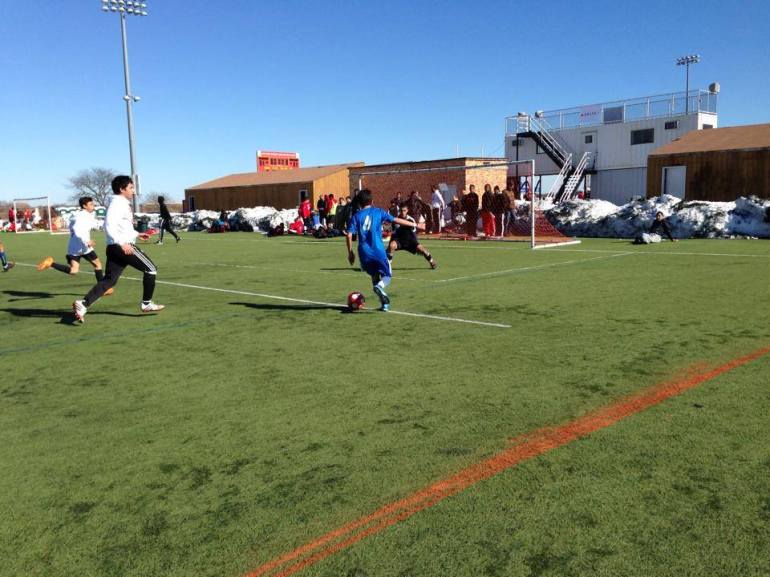 The winner of this regional tournament goes to Los Angeles to play the finals, and if successful, goes on to Brazil’s World Cup as ball boys. We reached the finals here, and lost on sudden death penalty kicks.

A learning experience for the boys, and specially for my son, who kicked the ball over the goal post on his first penalty kick experience.

A tough loss.  He had tears in his eyes as they broke away to go their separate ways, and only a few teammates came over to console him.  Losses don’t usually affect him this much.  But he really felt this loss this time.  Playing soccer has just been a past time for him, which he enjoyed doing.  Win or lose, he would just laugh at the end of the game and continue with life.  Perhaps this was one game he really wanted to win, with the bonus of travel to Los Angeles.  Or perhaps this is a turning point for him, where he now realizes that at this stage, winning is a little more serious.

It’ll be interesting to see how he moves forward from this.  Even though I talk to him about playing the game hard and doing his best, I was never the one to push him hard about playing soccer; it was more the father. When I feel that the father is unreasonably pushing him too hard (in my eyes), I have to keep reminding him that soccer is not in his son’s blood.  He doesn’t eat, sleep, talk, play soccer.  Pushing him too hard and too far may just make him lose interest in the sport, and make him stop playing.  And then where would we be?  Well, for me, it means that I have more time for my hobbies and crafts.  For the father …. well, he’d be a little lost without soccer every weekend.

With the resilience of youth, Justin has shrugged off the loss even before we drove out of the playing fields’ car park.  He has faced the ribbing and the teasing of the others at practice, with maybe just a little sting.  I hope he and the Team are stronger from this experience.  They’re going to need to be, because we travel to Dallas in April for the Dr. Pepper Dallas Cup, an international youth tournament.  Another opportunity for more learning experiences.