This is what we had to go through on our drive to the weekend tournament to Virginia.

Horrible conditions, slow driving. We were just hoping that it would be warmer when we had to play our 8 am game the next day.

No such luck.  8 o’clock in the morning was freezing, with the wind chill in the 20’s, it felt like.  Although it didn’t seem to affect the boys, running around on the field.  I suppose it was only slightly uncomfortable for them.  I think I suffered more than they did, standing on the sidelines.

This was repeated on Sunday morning as well, even though our game started an hour later.  But you know that fall-back one hour?  Yeah, well, the time may have been one hour later the next day, but it really was the same freezing 8 o’clock time. 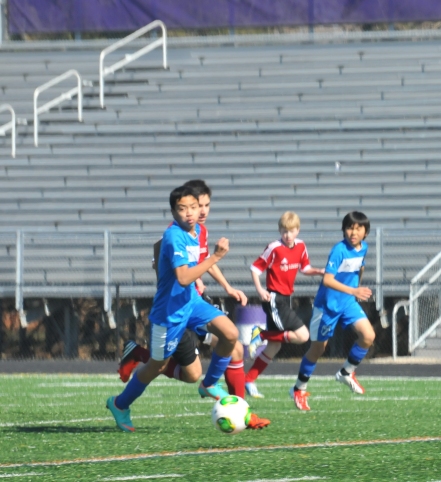 The Boys lost in the semi-finals.  A tough loss, decided by penalty kicks.  A lot of missed chances at goal, near misses, hitting the top bar.  But it was a good game, and in the end that is all you want out of your boys: to play a good game, win or lose.