After the fifth attempt (or more?), this is my new stitch learned, to add to my repertoire of stitches.  The entrelac stitch, in both knit and crochet. 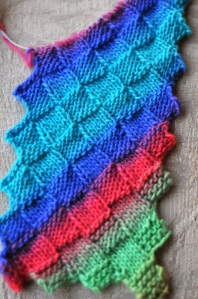 This is actually not a true entrelac – it’s more of like the basket weave stitch, knitted on the bias, which makes it look like the entrelac. Now that I have an idea of what the entrelac is about, hopefully I’ll be able to follow the instructions for the true knit entrelac stitch.  The crochet version was easier than I thought … well, I still have to figure out how to work the side triangles, so I’ll be experimenting with that next.

Back to this …  Using my new purchase, Kaleidoscope wool yarn, by Elegant Yarns, Inc., I started out following the pattern, row by row.  When I knitted about six inches, the scarf didn’t look wide enough.  So I frogged it, and started over again.  This time, I repeated the base pattern twice, to add two extra squares, before the repeat pattern for the body of the scarf.  This made the scarf about six inches wide now.

The yarn is self-striping, but with this pattern, the color changes coincide with a new row of squares, rather than in the middle of a row.

I’m enjoying this pattern and stitch, and I already have ideas of what to make next, with different yarns.  Perhaps this year, I’ll have my Christmas projects with the new stitch pattern done in time!